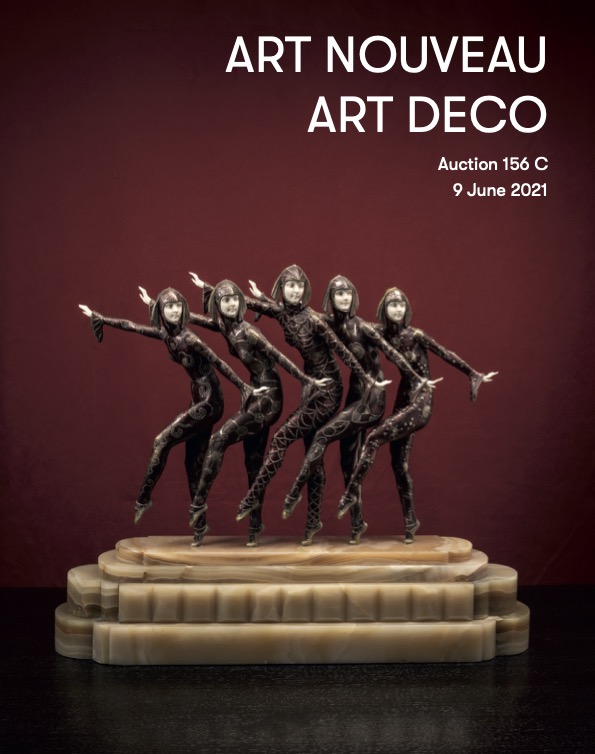 The auction on Wednesday includes selected ceramics, bronzes and pieces of furniture.

Emile Gallé is also represented here with a rare faience jug in the form of an anthropomorphic grasshopper from 1882-84. The jug with Imari decor is estimated at EUR 9,000 - 12,000.

Bentwood furniture is back in fashion. So it is not surprising that we were offered some pieces of furniture from the Kohn and Thonet factories, which we present here: We are particularly pleased about a rare ’Sitzmaschine’ by Josef Hoffmann from 1905. In this variant, instead of the diced backrest and the board seat, Viennese wickerwork was used. Made presumably by J. & J. Kohn, the adjustable armchair is now estimated at EUR 12,000 - 16,000. An armchair by the Englishman Mackay Hugh Baillie Scott is also very rarely found on the German art market. It consists of ebonised wood with a seat made of Viennese wickerwork, the backrest is adorned with a floral mother-of-pearl inlay. Two specimens of the model, with different mother-of-pearl motifs, were shown at the exhibition of the Dresdener Werkstätten, Hellerau, in the ‚Lady’s room and ‚Lady‘‘s bedroom’ in 1903. Our exemplar is now available for EUR 9,000 - 12,000.

Bronze and chryselephantine figures are still very popular. In addition to a number of richly carved ivory figures and many well-known works by Ferdinand Preiss, the figures by the Ukrainian-born Austrian sculptor Bruno Zach deserve attention this time. His 'girl with a cigarette' is a wonderful reflection of the Roaring Twenties. Her stance is casual, she’s wearing pyjamas with pants (!). Holding a cigarette in her hand, the expression on her face, framed by a curly short hairstyle, is completely carefree. The bow in her hair is an ironic addition. This young woman knows what she wants, has nothing in common with a good little girl who obediently does as she is told (estimate EUR 14,000 - 18,000).

Another unusual sculptor of this period is Roland Paris from Berlin. His characters always remind of the Commedia dell’Arte, nowadays one would say that they are comic-like. Pointed faces, slightly elongated bodies characterize his works. Four of these figures are on offer. The ‚Jester King' of 1925 follows this style, but seems to have ulterior motives. The royal crown sits crooked on the fool's cap, underneath is his elongated face, pointed nose, and deep furrows. His smile is not friendly, his eyes furtively turned to the side. What is he up to?.. The rare sculpture made of carved and mounted wood is estimated at EUR 4,500 - 5,500.

Romanian-born Demètre H. Chiparus delivers an absolute sensation this time! We are very happy to present you his fantastic group of five 'Les Girls' from 1928:

The inclined collector becomes a spectator of a lively stage scene: With elegantly spread arms and slightly bent upper body, the dancers move one step forward in sync, the tip of the right foot is on the floor, the left leg performs the dance movement. The heads are turned back, the gaze of the young women is directed towards an imaginary audience. The leotards cling to their slim bodies like a second skin, leaving only the faces of the 'girls' exposed. A comb-like headdress that starts at the top and almost reaches the shoulders gives them an Egyptian look. The faces and hands of the chryselephantine figures are finely carved from ivory. The rest of the figures is made of cold painted bronze in a beautiful copper red. If you take a closer look at the leotards, you will notice the elaborately decorated surfaces and decorations made of chains, net structures and ribbon pads, which are designed differently for each of the five women (estimate EUR 330,000 - 440,000)