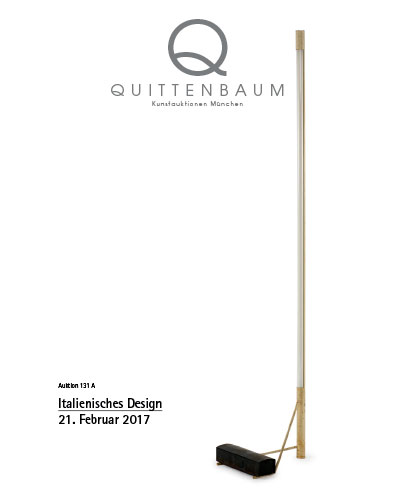 High demand from international clients via telephone lines and the internet as well as on the floor provided the first Design auction of the year with a hammer quota of more than 50% and a row of very high hammer prices. Most popular were the classics of the important Italian designers of the 20th century. Gio Ponti's - the forefather of Italian Design – 'Casa e Giardino' easy chair almost doubled its estimate of €1,500 with the help of international bidders to €2,700. His writing desk for the Banca Nazionale del Lavoro stayed inside its estimate at reasonable €1,200. Ico Parisi's sideboard, made of three different kinds of wood, from the late 1950s, went for its estimate of €1,500 to a US-based client. The complete study suite by Studio BBPR for Olivetti will go to the United States as well. The modular system from the late 1950s was knocked down in favour of a renowned California-based gallery owner for €5,200 (a little over its tax). A California museum secured itself the famous 'Tube chair' by Joe Colombo for €4,000, also a little over its tax. Colombo's lighting designs, 'Topo', 'Tiedro', 'Spider' and 'Coupé' found new friends as well for prices between €500 and €750.

Architects Tobia and Afra Scarpa, son resp. daughter-in-law of famous architect and glass designer Carlo Scarpa, used to design illumination, furniture and objects as a team. Their pair of '925' easy chairs, four 'Monk' chairs and a rare set of fireplace companions surpassed each their upper estimates to €3,800 (€2,200), €1,100 (€500) and €1,600 (€800) respectively and found new homes in the United Kingdom and Switzerland. A pair of Italian sideboards, from an unknown designer, experienced a huge increase. Estimated reasonably at €1,800 – 2,200, four international clients on the phones and two bidders on the floor fought over the simply elegant, high-quality design from the 1950s. After a long bidding war, an Italian collector secured the pair for himself with a hammer price of €8,600. Two very early classic 'Taccia' lamps by Achille and Pier Giacomo Castiglioni doubled their estimates to €1,300 and €1,400 respectively. The will adorn homes in the United Kingdom and Italy from now on. Bruno Munari's designs were popular as well. Two ceiling lights and a table light from the 'Bali' series changed hands for €600 and €500 respectively, the 'Acona Biconbi' ceiling light, featured prominently in the German newspaper Süddeutsche Zeitung, a design somewhere between “Disco ball and Space capsule” (SZ, 18./19.02.2017) received €2,000 from a German collector. An American collector bought Ettore Sottsass imaginative 'Ultrafragola' mirror for its upper estimate of €4,000.

The very early '1063' floor lamp by Gino Sarfatti from the year 1954 was indisputably the highlight of the auction. Tubular metal, fluorescent tube and transformer coated with sheet metal – purest minimalism – coveted worldwide! Five telephone lines and diverse bidders online made the design icon shoot up from a moderate €14,000 step by step during a long bidding war to a sensational €24,000 (netto). One of the highest ever hammer prices reached for this object in Europe. Sarfatti's '2042/9' ceiling light, with nine large matted glass balls, received €3,500. Both lights went to a Paris-based dealer.