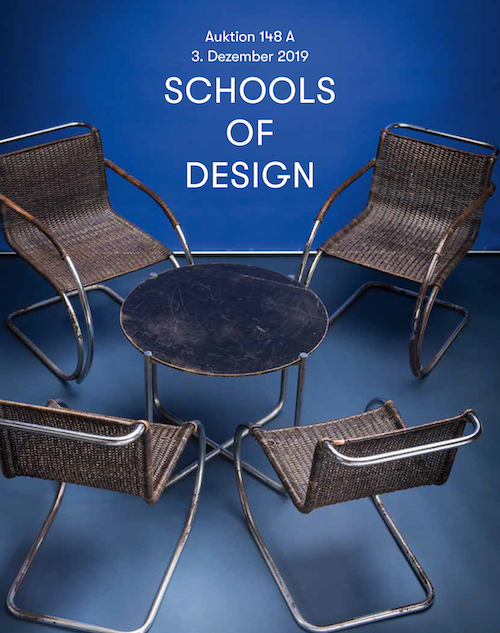 Henry van de Velde in particular brought enormous increases to the auction room. The 20 pieces of cutlery, which were valued at € 20,000, were finally sold to different private collectors for € 77,000. Also in the Art Nouveau area the complete wedding procession by Adolph Amberg was largely sold. Here, the rare ‚Kneeling Caucasian' was particularly popular - at € 3,000, she ended up with € 14,500.

A special offer of rare objects from the Wiener Werkstätte also attracted many international collectors. Here Josef Hoffmann's 'Stehlampe groß' from 1910 was increased from € 6,000 to just under € 19,000.

The house was able to collect the high results for objects from the Bauhaus period in June for the special auction '100 Years of Bauhaus'. However, the small private collection of the architect Emil Bruhn produced some remarkable results. A five-part seating group by Ludwig Mies van der Rohe raised a good € 21,000 and the publication 'Gefesselter Blick' by Heinz and Bodo Rasch was worth almost € 8,000 to a collector (starting price € 300).

At the same time as the Bauhaus, completely different design objects were created, which have yet received little attention in the art market. A separate chapter in the auction was devoted to anthroposophical design from the circle of Rudolf Steiner. Almost all of the furniture, lights and handicraft objects offered were sold here - a desk raised € 4,500.

A trend has been confirmed again - the design of the 70s and 80s is in high demand - there were good increases for plastic furniture: the two Floris chairs by Günter Beltzig (€ 12,500) and Peter Shires Memphis armchair 'Bel-Air' - armchair (€ 13,200).