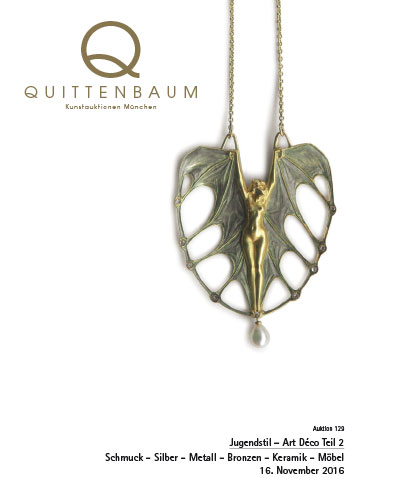 As expected, the stars of the auction were found in the Jewelry selection. The three works by René Lalique surpassed their estimates by far. Lalique's 'Femme chauve souris' necklace, taxed at €30,000 - 50,000, was courted by several international telephone bidders. A dealer secured the rare piece for himself for €84,000 with fees. Prior to that, the 'Bleuets' ring had reached €19,000 and the ring with Baroque pearl was knocked down at €13,000. After battling fervently, a buyer allowed €11,650 with fees for a necklace by Georg Jensen, made between 1909 and 1924. It had been called up at €500.

French Glass provided high hammer prices as well. Customers from the Far East showed huge interest via telephones, as did the clients in the room. A Swiss collector got the upper hand for the Daum Brothers' 'Libellules et Renoncules' vase at €14,000 with fees. Early works by Emile Gallé were coveted too. The enameled 'Dahlias' vase got around €10,500 with fees from an American collector. It had been called up at €6,000.