We broadcast all our auctions live on the internet. To bid via our website, you need a verified customer account. This allows you to place bids in advance via the individual view of the objects, or you can register for live bidding. 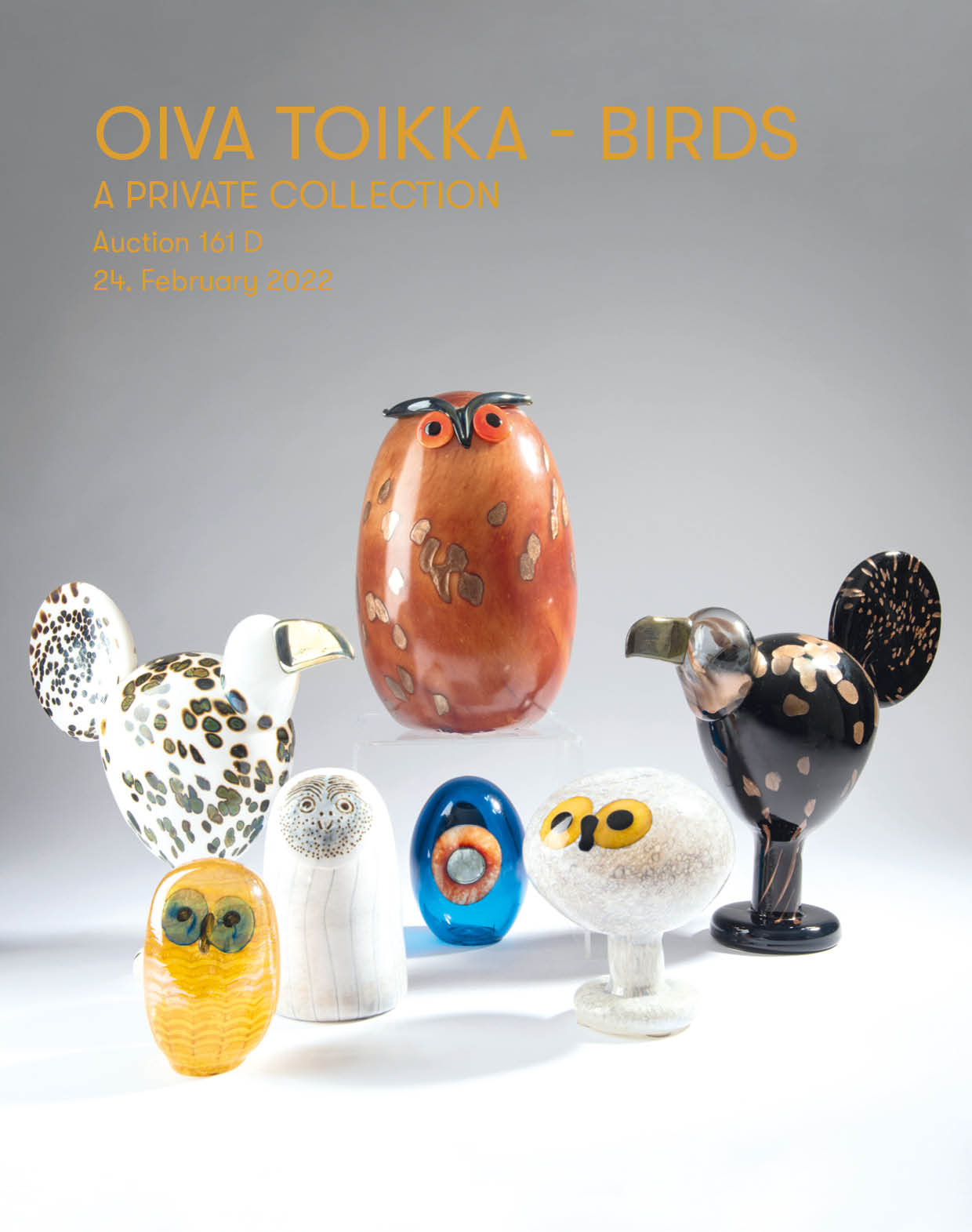 "I am not looking for perfection, I want it to be fun".

Oiva Kalervo Toikka (1931-2019) is one of Scandinavia's most important glass artists, and his 'Birds' series earned him a prominent place in the history of modern art glass. Born in 1931 in Viipuri (Viborg), having finished his studies at the Helsinki College of Art and Design, he began his career as a ceramic designer at the Arabia Porcelain Manufactory, where he worked from 1956 to 1959. After an interlude as a lecturer at the Academy of Art, he moved to Nuutajärvi, where he worked for the local glass manufactory. Inspired by Finnish folk art and international Pop Art, he created glass sculptures in bright colors such as the Kurkkupurkki (cucumber glasses) as well as the 'Lollipops' built up from several layers of colored glass and clear glass, which were realized in limited numbers. The tableware series Kastehelmi (Dew Drop, 1964) of pressed glass has been particularly popular and commercially successful, it is still distributed today all over the world by Iittala after they merged with Nuutajärvi in 1988.

Oiva Toikka became most famous for his series of glass birds 'Birds by Toikka' for Nuutajärvi. Often inspired by real animals, but sometimes born of imagination, the series, which has now grown to over 400 designs, includes specimens from the entire birdlife: crows, seagulls, swans, ducks, owls, chickens and finches, to name but a few. Mouth-blown, each bird is unique. The series began in 1972 with the small 'Sieppos', flycatchers. In the years that followed, these were launched in various colors, depending on what colored glass was available at the time. These were followed by the somewhat larger 'Kiikkuri'. In 1979, the magazine 'Kotiliesi' offered one of the colorful Toikka birds from the Christmas exhibition at the Nuutajärvi Museum, fueling the success story of the birds as collectibles. The more popular the birds became, the more Toikka's ambitions grew to fully utilize his glassblowers' skills for his designs. From 1996, the charming figurines were successfully marketed under the title 'Birds of Toikka', the same year Iittala began issuing limited editions of new year birds and new year eggs.

Against this background, we are very pleased to have been entrusted with a particularly extensive and exciting compilation from the estate of a German collector. The collection comprises around 350 objects, including new year birds, new year eggs, two new year cubes and anniversary birds from limited editions. In search of beautiful objects, the collector even traveled to Nuutajärvi and met Oiva Toikka, the creator of the objects of his collecting desire. Various early versions of the ‚Flycatchers', designed from the early to mid 1970s are represented in the catalog. In addition, the owl birds and eagle owls, with their large eyes and individual faces, are among the most expressive designs. While Toikka put the bodies of many of the birds into reduced and streamlined shapes, the decors appear all the more playful - Toikka's executing glassblowers experimented with combed thread decors, fused murrines and metal oxides, the alternation of transparent and opaque sections in order to exaggerate the biodiversity and multifaceted nature of Scandinavian birdlife into the striking and fantastical.

Secure your favorite bird. We hope you enjoy bidding in the auction.