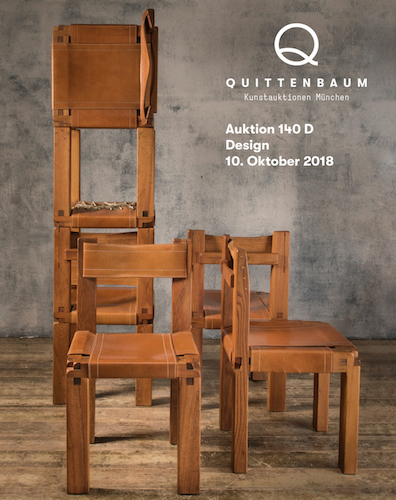 Right after this, the 'Revolving Cabinet' - 'PC/15', 1970 by the Japanese Designer Shiro Kuramata (lot 786) found a new owner for €3.000. A fierce bidding battle evolved around a candlestick after Rudolf Steiner (lot 659). The item was finally sold for €3.300, this being five times its estimate after some disappointed bidders had given up.

Pairs of armchairs were especially sought after during this auction: a London based gallery even purchased three pairs. Among these a pair of armchairs by the Finnish designer Ilmari Tapiovaara from ca. 1955 (lot 717). Both of the other pairs of armchairs happened to be by Czech Designers (lot 672 for €3.800 and lot 690 for €3.200). Is this coincidence? Since both of them were sold above the estimate we might be spotting the rediscovery of Czech Design. In the area of Scandinavian lighting, the ‚Ring-Leuchte' wall lamp for the 'Visiona 2', 1969 (lot 778) is still very popular and was sold for €2.600. The Finnish designer Pavo Tynell also stays very much sought after: the bids for his floor lamp 'Hotel Vaakuna Helsinki‘ (lot 678) increased from €3.000 to €4.600.

Especially noteworthy is the 'Compartment Man' shelf by the Swiss design duo Susi und Ueli Berger (lot 797): this item is very rare in auctions since it is nowadays only produced on special request and therefore seldom sold. Produced at a factory price of €4.000 the buyer made a real bargain with the hammer falling at €2.200.