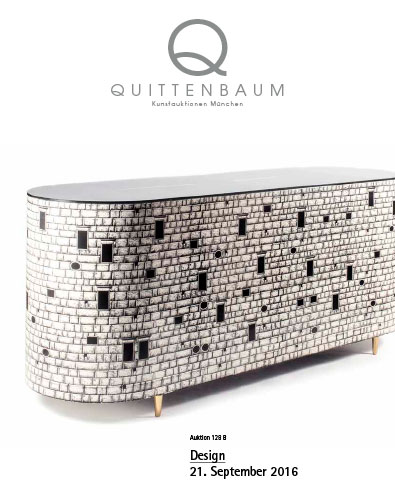 Interest in the Icons of Design history was highest in the Italian selection. Piero Fornasetti and his son Barnaba, Ettore Sottsass and Joe Colombo received the highest hammer prices in the auction of 422 lots, which took place on September 21, 2016. The hammer for Barnaba Fornasetti's counter with black and white 'Architettura' pattern fell at €16,000 in favor of a German design collector. The price for Ettore Sottsass' 'Ultrafragola' mirror was increased by three bidders home and abroad up to €5,800. Colombo's 'Tube Chair', in yellow, whose components fit into a handy canvas bag, received its estimated €3,800. Michel Mangematin's coffee table with bronze base is of the highest elegance. It went into the English market for €5,000. Jindrich Halabala's pair of '269' easy chairs, which featured prominently in 'Architektur & Wohnen' magazine 5, went to China for €3,600. Unexpectedly, the droll comic figurine of Sylvester the Cat, almost 120 cm high, caused a fervent bidding war among six bidders on the floor and via telephones and went from its estimate of €900-1.200 up to €4,300.