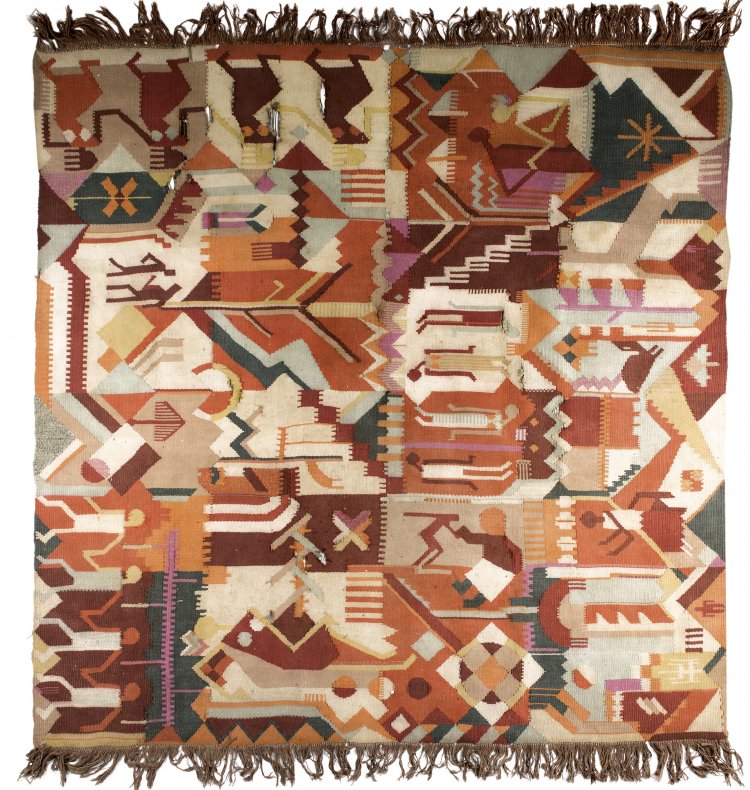 Carpet for the child's room of the mansion of Dr. Kurt Luthmer

Hedwig Heckemann and Ewald Dülberg. Carpet for the child's room of the mansion of Dr. Kurt Luthmer, 1923/24. 275 x 305 cm. Made at Art Academy Kassel. Multi-coloured cotton.

'One of the most important designs of Heckemann' wrote Horst Dauer about the carpet in his essay on the weaving department of Bauhochschule Weimar. The carpet was custom-made for Dr. Kurt Luthmer, most probably a collaboration between Hedwig Heckemann and Prof. Ewald Dülberg. The figurative motifs reveal a personal connection between the patron and Dülberg. Depicted are, among others, Dr. Luthmer and Prof. Dülberg having a conversation, his daughter holding a doll, and Hedwig Heckemann herself.   Heckemann and Dülberg had been working together at the Art Academy Kassel. From 1924 onwards, they had presided over the weaving department of the Bauhochschule Weimar. The carpet had been made in their last year in Kassel. Heckemann and Dülberg got their influence from the late expressionism. The carpet shows first features of Heckemann's and the Bauhochschule's later popular style with its geometrical precision using triangle, rectangle and square.   Provenance: The carpet has always been in the family of commissioner Dr. Kurt Luthmer and had been exhibited at Torwache art collection Hesse Kassel since 1976.